US programmatic CTV video advertising will soar in 2021

For years, growth in video advertising has driven overall programmatic display growth. Advertiser demand for video impressions has always outstripped supply, but supply has gotten a big boost as consumers started adopting streaming video viewing in larger numbers—especially on connected TV (CTV) devices—and more of those impressions have been made available programmatically. The pandemic supercharged the consumer behavior side, and many sources we interviewed mentioned dramatic increases in the number of available CTV video impressions.

According to a November 2020 poll from the Interactive Advertising Bureau (IAB), 60% of US advertisers planned to shift ad dollars from linear TV to either CTV or OTT in 2021. Among those planning to do this, 81% cited targeting and efficiency as a reason, while 55% pointed to incremental reach.

Experts we interviewed cited two major inhibitors to further programmatic CTV video ad growth. (Though, to be sure, all agreed that this category of spending would continue growing rapidly.) The first was the difficulty of measuring CTV ad results. These include the problems of cross-channel measurement outlined in our May 2020 report “TV and Digital Video Measurement 2020: Addressing Cross-Platform Challenges.” They also include the inherent difficulty in measuring the results of ads that don’t typically—and aren’t expected to—lead directly to a click or other type of conversion.

The second major problem was a relative lack of addressability on CTV versus other programmatic channels. There are two interrelated issues at play here. First, the nature of CTV makes it difficult to identify viewers. CTV apps are a cookieless environment (like mobile apps), and CTV devices are often shared by a household, making it difficult to tell who is watching at any given time.

Additionally, a significant portion of CTV advertising is not decisioned on a real-time, impression-level basis. Large chunks of spending come from upfront or other long-term commitments as part of programmatic guaranteed deals. Those deals don’t provide the flexibility advertisers may be used to in other programmatic display channels. Several people we spoke with on the buy and sell sides indicated they hoped for advances in technology that would allow a greater degree of addressability in CTV and a more sophisticated decisioning setup for programmatic guaranteed buys in all channels.

Advances in cross-channel identity and measurement should help here, and the IAB also recently rolled out a version of ads.txt and app-ads.txt for the CTV environment, which should help ease concerns about fraud and fragmentation in the market.

To learn more about our spending and trend predictions for 2021, Insider Intelligence subscribers can read our recent report: 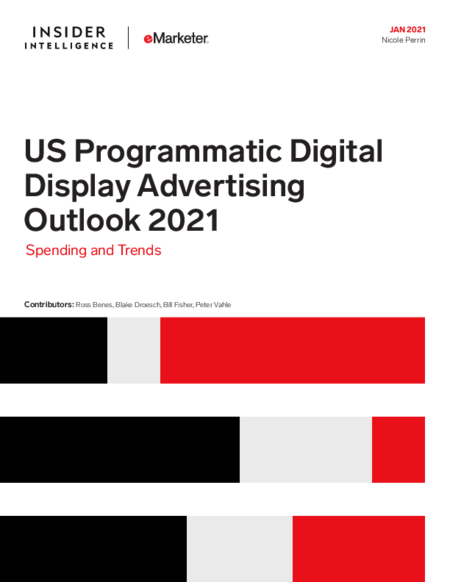