US social network video ad revenues will reach $11.69 billion in 2020, more than doubling the 2017 total of $5.68 billion. This represents annual growth well into the double digits. It also shows rising shares of total digital ad spending and total media spending throughout the forecast period. These hefty numbers mark the bulk of the difference between our previous video ad spend figures (which did not include social platforms) and our current ones.

eMarketer’s latest report in its quarterly series, “Q3 2018 Digital Video Trends: New Social Video Ad Revenue Forecasts for Facebook, Twitter and Snapchat,” goes in depth on how this new forecast methodology changes the outlook for various players within the digital video space, and how it compares with US TV spending. 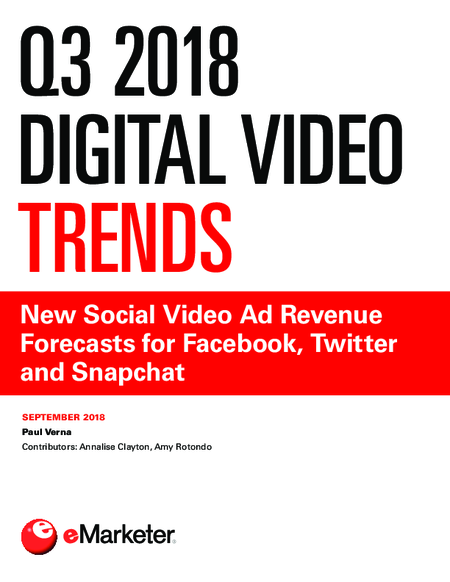 Subscribe to the "Behind the Numbers" podcast on SoundCloud, Apple Podcasts, or Stitcher.

In the latest episode of Behind the Numbers eMarketer’s Digital Video expert Paul Verna updates us on the state of digital video. He answers how much are the social platforms contributing to digital video ad spending? On what devices and platforms are people viewing this digital video? And what are the different content strategies of the digital video players?

The inclusion of social media video ads into the video ad spending forecast means that video numbers are substantially higher than those from March 2018. The forecast now calls for video ad spending to reach $50.63 billion in 2022, nearly double 2018's total of $27.82 billion. Not only are the video numbers substantially higher than those in our March 2018 forecast (because of the inclusion of social media), but the percentage increases over the forecast period are also higher, with 29.7% growth in 2018 and 9.9% by 2022.

Not surprisingly, Facebook accounts for the lion’s share of the social media video spending. US video ad revenues on Facebook will reach $10.20 billion in 2020, again more than doubling the 2017 total of $4.78 billion. These massive figures help explain why Facebook and Google make up a duopoly of digital advertising as a whole, particularly with video advertising.

Article
How our Meta ad revenue forecast has changed