Average Time Spent with Media in 2019 Has Plateaued

Digital is making up losses by old media

In 2019, time spent with media by US adults will average 12 hours, 9 minutes per day (referenced as 12:09), a 1-minute increase from our estimate last year. (We account for multitasking in our figures: If a consumer is using two different media in the same hour, we count that as 2 hours of total time spent.) This is a negligible gain compared with the 1.5-hour increase in daily time spent from 2009 to 2015.

But next year should be more positive for marketers: We expect a 4-minute increase in time spent, when tentpole media events like the 2020 presidential election and Summer Olympics begin in earnest.

“Mass adoption of smartphones made media multitasking standard procedure for many people, and this often consisted of looking at social media or other content on a phone while sort-of-watching TV,” said Mark Dolliver, principal analyst at eMarketer.

“But if you’ve made a considered decision to watch something on Netflix and have paid a subscription fee to do so, you’re less likely to distract yourself by layering another kind of media usage atop that. So, less multitasking means less of an increase in total time spent with media,” he said.

One factor contributing to digital’s gains is the rise in digital audio. More widespread adoption of smart speakers adds a bump to digital time spent, as do the increasing popularity of podcasts. We estimate that daily time spent with digital audio in 2019 will average 1:20 and increase to 1:24 next year.

With smartphones, time spent as calculated across the adult population is still rising, but gains are subdued as increases in smartphone penetration in the US have slowed.

In our new report collection on time spent in the US and eight other markets across the globe, we find that there are large disparities in total average time spent. People in the US are on the high end of the hierarchy at 12:09, and those in India are on the low end, with people spending just 4:59 on average. Our global estimates also find that higher smartphone penetration does not automatically mean more time spent on media. Smartphone penetration in Canada, for example, is at 81.6% compared with the US’ 80.5%, but time spent in Canada is 2 hours less than that of the US.

For further estimates of time spent across different media categories and what they mean for marketers, check out our latest PRO View collection, featuring forecasts for the US, Canada, the UK, France, Germany, China, Japan, South Korea and India: 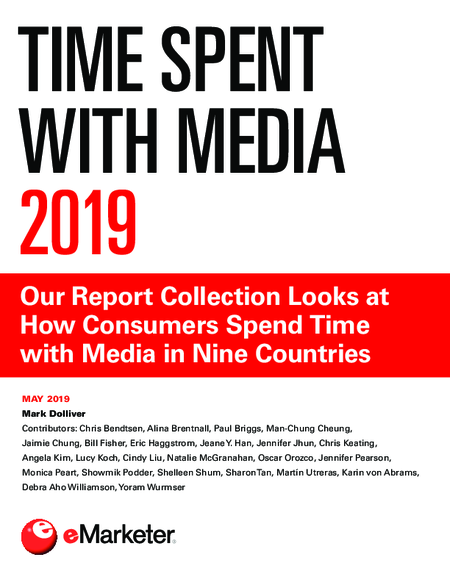