It’s a hard knock life for tracking cookies these days.

Ad serving firm Flashtalking analyzed 20 advertisers worldwide throughout Q4 2017 and found that 64% of their tracking cookies were either blocked or deleted by web browsers. According to the research, rejection rates on mobile devices were particularly high—75% of mobile cookies were rejected, compared with 41% on desktop.

Tracking cookies have been a staple of digital advertising since its inception, and the de facto method that many marketers rely on to track and target users online. But the cookie is beginning to crumble as users shift their media consumption to mobile devices, and as browsers and regulators crack down on digital privacy.

Just a few years ago, people spent most of their time online on desktops and laptops. But now US adults spend 1 hour, 14 minutes more on their mobile devices each day than on their computers, eMarketer estimates.

Cookies were originally designed to track users across the web on browsers. It’s more difficult to track a user who spends their internet time opening and closing mobile apps, since those apps operate independently of each other. In the US, users spend 87% of their total mobile internet minutes in-app, according to comScore. This makes it more difficult to use cookies to track people on mobile than on PCs.

The waning of the prominence of cookies has been accelerated by changes by the most popular web browsers, which are making it more difficult for advertisers to drop pixels onto users’ devices. Last summer, Apple’s Safari browser made tracking users through cookies harder by deleting third-party cookies after one day. In February, Google's Chrome launched its built-in ad blocker, which weeds out intrusive and annoying ads. 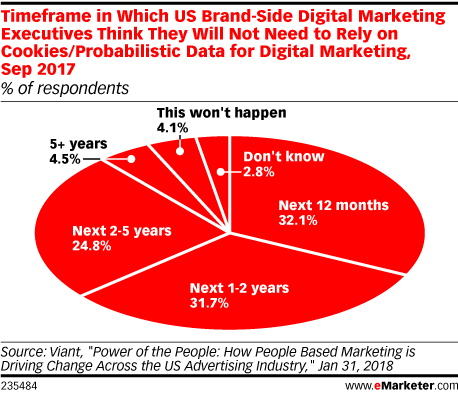 Article&nbspFeb 22, 2018
Most Marketers Believe Tracking Cookies Will No Longer Be Needed 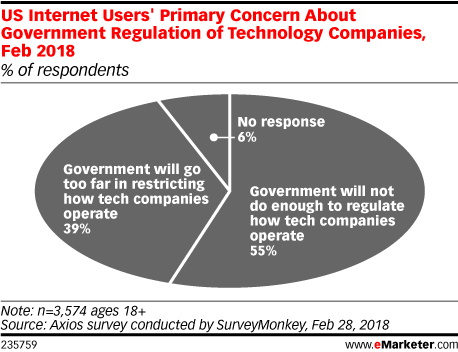 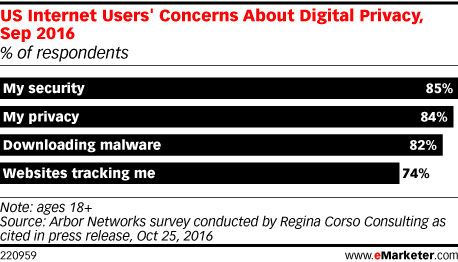 Article&nbspMar 31, 2017
How Will Consumers React to the Removal of Data Protections?

Although public opinion is turning against large ad platforms, the political climate in the US has generally tilted toward less regulation of tech companies. In Europe, however, regulators are making moves that put pressure on advertisers that rely heavily on tracking cookies.

The EU’s General Data Protection Regulation (GDPR), which goes into effect in May, states that people’s personal data can only be used if they give companies permission. Several ad tracking firms have long relied on user data without getting such permission, but since companies that fail to comply will face a stiff penalty, the GDPR could lead to a decrease in third-party cookie usage. Regulators are also updating the EU’s ePrivacy directive—which was originally implemented in 2011 and instructs advertisers to ask for consent before collecting cookies—to bring it in line with the GDPR.

Marketers are aware that the role of tracking cookies in the ad ecosystem is eroding. According to a September 2017 survey of US brand-side digital marketing executives by Viant, more than 60% of respondents believed they will no longer need to rely on cookies for the majority of their digital marketing within the next two years.

There are cookie alternatives, such as persistent IDs and device graphs, that marketers may look to as they yearn for universal identifiers. But even if marketers are aware of the need to use alternative methods of user tracking, it is difficult to shift away from entrenched habits. Many players in the ad industry cling to cookies, as was evident when the largest ad industry groups protested Apple after Safari implemented its latest tracking restrictions.