What Lies Ahead for Connected Cars?

A Conversation with VMLY&R’s Aleks Niestroj

Connectivity has become a major focus in the automotive industry. The ability to integrate vehicles with the internet-of-things (IoT) universe brings opportunities for enhanced services and personalization, but marketing executives like VMLY&R’s Aleks Niestroj think that there’s still progress to be made before cars go from “connected” to “smart.”

Niestroj, executive director of experience strategy and insights at the marketing agency, has worked closely with Ford on various connected ecosystem initiatives. We spoke with him about what lies ahead for connected cars and how advertisers might get involved.

How far away are we from smart cars being the norm?

5G promises to change a lot of things and I believe it will. First and foremost, that’s when everything starts to become connected, which brings the potential for everything to be smart. I think we’re a few years out, not just because of technology, but also the user adoption curve. Not everybody is buying cars with modems in them and not every car with a modem is smart. Look at the curve of improvement with the iPhone, for instance. It started out as "smart phone," but it was really just a phone connected to the internet. But over time, iPhones and Androids have gotten better and became truly smart.

How might we see consumers begin to interact with connected cars?

I think it’s going to be the mundane stuff that makes people's lives easier. But that’s the challenge with cars. As cars get better, they need less service—and electric cars will need even less service than internal combustion engine cars. However, cars are going to have tires for a long time, and tires are going to have air or nitrogen for a long time to come, too. Cars can become proactive about driving habits, like an alert that says, “Hey, you can save your brakes and tires by easing off the throttle and slowing down a bit earlier.”

What opportunities do advertisers have in this space?

Cars are going to be challenging for advertisers. They’ll need to find ways to meaningfully connect with their consumers at points that matter to them. I don't think there will be a lot of opportunities in terms of push messaging or more sophisticated approaches like programmatic.

As a brand, you’ve got to provide value to consumers; if that value exchange isn't there, then it’s not very sustainable. Connected car advertising will need to be something beyond driving past a Chick-fil-A and getting an ad for Chick-fil-A. It should know that I’m a vegetarian and I don't like Chick-fil-A. But I am a Starbucks fanatic, so it should say, "Hey we're driving past a Starbucks and I know you're 10 minutes ahead of schedule. We can make a detour, you can order your favorite coffee, and still be three minutes ahead."

Right now, big tech, automakers and white-label providers all seem to be vying for control of the connected car. Do you think a certain type of company will eventually own the market, or will they be forced to collaborate?

I hope it comes down to the latter. Right now, we're seeing automakers try to drag race the tech giants. Manufacturers are awesome at a lot of things, but they are not awesome at scaling software that gets updated with great frequency and speed. In the same breath, tech giants don't know how to manufacture large vehicles at scale.

The catch is that everybody’s ecosystem is already owned by Apple or Google. As a consumer, I’d want the OS in my car to be the same I use for other smart devices. We’ve conceded that the phone is the center of everybody's universe. Trying to wrestle the centered ecosystem away from people is going to be tough—and for it to be something as large as a vehicle seems unreasonable. But having that vehicle seamlessly connect to their ecosystem? That seems like a home run for anybody who gets there.

For more insights on connected cars, eMarketer PRO subscribers can read our report: 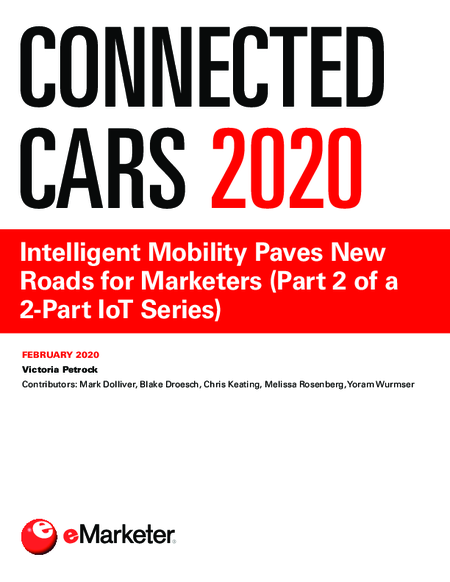 Not sure if your company subscribers? You can find out here.