Which Retailers Won the 2019 Holiday Season?

The 2019 holiday season had several retail segments outperform the average, in addition to some underperformers.

Mastercard SpendingPulse, which tracks spending patterns across channels, has visibility into how these retail categories performed.

“This year, apparel was up 1%—essentially flat. So, this was not an apparel season,” said Steve Sadove, former chairman and CEO of Saks and senior advisor to Mastercard.

Many of the same category trends occurred on the ecommerce side of the ledger, pointing to category strength and weakness rather than channel-shifting. According to Rakuten Intelligence, the top-gaining ecommerce category this past season was home improvement, which grew 43.9% vs. a year ago. Consumer electronics/major appliances jumped 17.7% to rank among the leaders, on the strength of smartphones, wearables and smart-home electronics, while apparel/footwear grew by single digits (8.4%)—several points below the ecommerce channel overall.

Following several consecutive quarters of declining sales, iPhone sales reversed course in a huge Q4 2019 showing with revenues up 8% on the strength of demand for iPhone 11 models as well as Apple's AirPod hearables—which are proving to be a popular gift, given their affordable (albeit still premium) price point. In the smart-home sector, sales of Amazon's Ring doorbells shot up 180% year over year in December, according to marketing intelligence firm Jumpshot.

Amazon predictably led the way among ecommerce retailers in traffic in December with 214.8 million unique visitors, up 4% vs. the prior year, according to Comscore. Walmart remained a strong No. 2 with 138.3 million (up 5%), while eBay rounded out the top three with 106.9 million (down 2%).

Walmart’s and Target’s online performances likely benefited from their advanced click-and-collect operations. According to Rakuten Intelligence, the class of merchants offering click and collect gained significant US ecommerce market share this past holiday season on the heels of similar gains in 2018. Their share of sales rose from 21.6% in 2017 to 27.0% in 2019.

“Despite Peloton’s controversial holiday TV ad—which some interpreted as misogynistic in its depiction of a husband getting his already-thin wife a Peloton stationary bike for the holidays—it may have served only to broaden awareness of the brand while doing little to deter its adherents,” said Andrew Lipsman, eMarketer principal analyst and author of our recent report, “US Holiday 2019 Review and Looking Ahead to Holiday 2020 Planning.” The company posted impressive top-line performance during the holiday quarter, with revenues blowing away Wall Street consensus estimates of $423.7 million by more than $40 million.

In addition to many department stores, Victoria’s Secret also struggled, reporting a 12% decline of same-store sales during the holidays. On the ecommerce side, eBay suffered declines as US gross merchandise value (GMV) dropped 8% amid growing competition from Amazon, Etsy and Facebook Marketplace.

For additional insights into the 2019 holiday season and ways retailers can look ahead to 2020, eMarketer PRO subscribers can read our recent report: 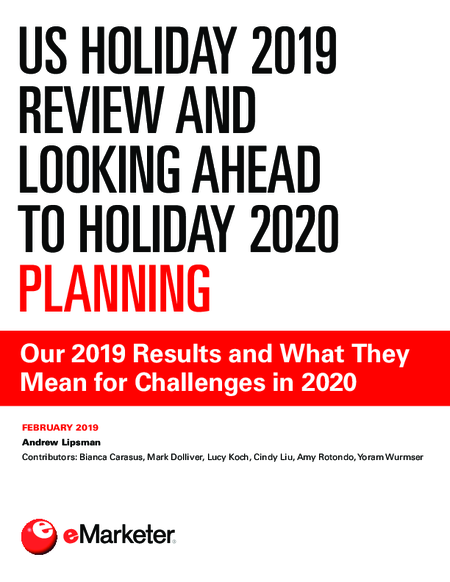 Audio
Reimagining Retail: How to elevate a luxury brand and how they're expanding their reach

Article
Pet sales grow with help from the bare necessities

Article
Which retailers benefited most from Prime Day 2022?

Article
Food inflation takes its toll on US consumers

Article
Rent the Runway unsteady on the catwalk