Why Retailers Are Getting into Digital Media

The lure of retail media is even stronger than it might seem, but retailers grapple with whether it’s a viable opportunity or a shiny new object to chase.

With many retailers starved for topline growth amid foot traffic declines and online dollars migrating to Amazon, many are now exploring supplemental revenue streams. According to a February 2019 survey by Duke University’s Fuqua School of Business, the leading challenge facing US CMOs was driving growth, cited by 37.9%, nearly three times higher than their next biggest challenge. (While the study asked about challenges facing CMOs more broadly, it is especially true for retail CMOs today.)

But ad revenues act as a path to growth, and Amazon’s ad business is proof that it can be achieved. “There’s a point where the realization of an evolving business model or net new revenue stream becomes evident,” said Chris Lundquist, senior vice president and global lead of marketing science at advertising agency BBDO, who was interviewed for our latest report, “Retail Media Networks 2019: How Retailers Are Building Digital Ad Businesses.”

Digital ad revenues aren't just revenues—they're highly profitable, with a more favorable margin profile than the typically thin-margin retail business. Consider that leading digital ad platform Facebook’s gross margin is over 80% and Google’s is over 55%. Walmart’s retail-dominated business, by contrast, is under 25%.

Amazon’s growing ad business offers perspective on how even modest incremental revenues can have a profound impact on a retailer’s profits. Amazon’s “other” revenue stream—which consists primarily of advertising revenues and is frequently used as a proxy for that business—reached $10.11 billion in 2018, representing 4.3% of overall revenues. (Amazon does not break out the segment’s operating profits in its public financials, but it is widely believed, along with Amazon Web Services, to be fueling Amazon’s recent surge in profitability.)

The profit incentive is a huge draw for retailers as they realize the value that can be derived from their first-party data. And the pressure to monetize that asset comes from both directions.

“Sometimes, we’ll talk to retailers and they’ll use the term ‘data monetization,’” said Sean Cheyney, vice president of global business development at Triad. “When I hear that term, it tells me there are companies that have gone into them saying, ‘Sell us your data.’ At the same time, they may be hearing from the C-suite to find a way to bring in extra revenue.”

For more information about the emerging space of digital retail media and key players in the market, eMarketer PRO subscribers can read our latest report: 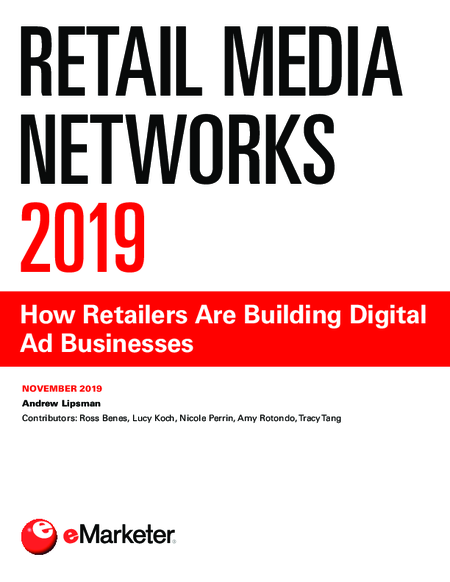 Article
US social buyers are spending more than ever

Article
The ad industry is unprepared for a regulatory crackdown