Powerful data and analysis on nearly every digital topic

What is Drone Delivery?

Drone adoption is growing rapidly among both consumers and companies, and the retail industry is leading the way in that adoption. Drones could serve different purposes for retailers, but drone delivery (which is exactly what it sounds like: products delivered by drone) is the most well-known and readily apparent.

And some companies have already taken the first step…

Drone delivery pizza became a reality in November 2016 when Domino’s, with its drone delivery partner Flirtey, dropped off an order at a customer’s door at 11:19 a.m. in Whangaparaoa, New Zealand, 25 km north of Auckland. (If you’re curious, the first pizza drone delivery was an order of a Peri-Peri Chicken Pizza and a Chicken and Cranberry Pizza.)

A team of drone experts and a pilot autonomously controlled Flirtey’s DRU Drone through GPS navigation to drop off the pizzas.

Pizza drone delivery is one thing, but when the largest e-commerce company in the world starts toying with the idea of using unmanned aerial vehicles (UAVs) to fulfill orders, that’s another story entirely.

At Amazon’s 2019 re:MARS conference, the e-commerce giant stated that it plans to launch its drone delivery service, Prime Air, “in a matter of months.” Amazon plans to deliver customers’ orders within 30 minutes through its Prime Air delivery program, which would blow away its two-day Prime shipping and two-hour Prime Now deliveries.

The Prime Air delivery program uses autonomous drones guided by GPS systems. With last mile delivery being the most expensive and time consuming part of the shipping process, drone delivery has the potential to give Amazon a leg up on other logistics companies.

Google-parent Alphabet’s Wing is a drone delivery service in partnership with FedEx and Walgreens. It delivers select FedEx packages as well as health and wellness products, like over-the-counter medicines, from Walgreens.

Wing’s drones deliver packages that weigh between two to three pounds right to customers’ doorsteps. While taking advantage of Wing’s ability to improve speed and cut costs, Alphabet also boasts fuel efficiency as the drones are driven by an all-electric power system.

In 2019 the Federal Aviation Administration (FAA) approved UPS Flight Forward to become the first-ever drone service operating as a commercial airline. Business Insider Intelligence reported that although the drone service can only operate in suburban and rural regions, it has complete autonomy on size and scope of its drone operations.

UPS later teamed up with CVS Pharmacy – indicating that the company is looking to focus its initial drone efforts on medical product delivery, 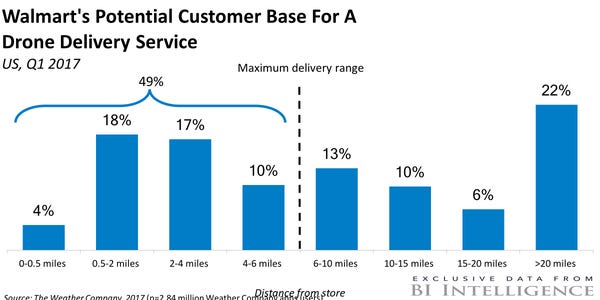 In 2019 Walmart was on pace to file more drone patents than Amazon for the second year in a row. With drones having a fairly small range of about 15 miles, Walmart is perfectly positioned to dominate the commercial drone industry thanks to its giant network of stores in the US.

Delivery drones have both pros and cons, even though the benefits might be more readily apparent off the bat.

For starters, small package sizes of prescription and medical deliveries are ideal for drone delivery services, as drone operators are limited by the FAA to carrying cargo that weighs under 55 pounds.

And tech companies like Amazon and Alphabet should start making an effort to partner with major retailers – otherwise the likes of Walmart may move ahead of them in the race to achieving dominance in the commercial drone market.

Thank you for signing up for our newsletter!

You can read recent articles from Insider Intelligence here.

Powerful data and analysis on nearly every digital topic

Best technology companies to work for, according to employees